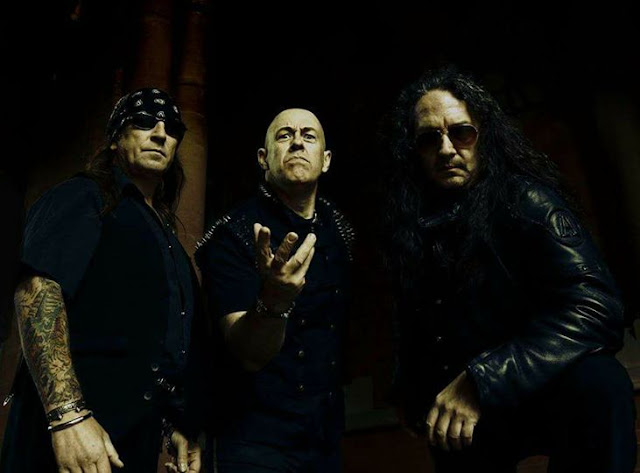 Well... I just had the honour of talking to Venom Inc. front man Tony (The Demolition Man) Dolan about about the huge news that they have been singed to Nuclear Blast Records....  For those that may not be aware Venom Inc... features original Venom founding members Tony Bray (Abbadon) Jeff Dunn (Mantas) and of cours bass player / vocalist Tony Dolan (who replaced Chronos after the original lineup of Venom fell apart in the mid 80's)


You just broke the news that Venom Inc. will be signed to Nuclear Blast Records.... This is a big fucking deal!!! so whats the plan of action from here?
Yes, well, we were already working towards the album demos so now it is all systems go to get the albums completed and out as soon as possible..as we have a full year of touring already looming...

Venom pretty much shaped every black /death / thrash heads childhood does it get weird when people come up to you and ask you wierd shit like im doing now?
Hahahahaha.....we were ALL from an extreme area of industry at a shit time so it shaped all of us...is it weird? No, it is humbling to us all and an honor that anyone has influenced anyone through their art

I have heard on the interwebs you guys and Chronos aren't exactly seeing eye to eye with the usage of the name 'Venom' are you going to keep using this name and what are your thoughts on Chronos' protestations?
A: No thoughts at all, he can moan for the rest of his time if that makes him feel happy, we are just doing our thing and the rest is of no importance. Seeing eye to eye? Well, we just tell the real story, he chooses a kind of strange series of alternating facts. The official biog on his site that he administers himself has changed 6 times in 10yrs so it is hard to keep up to be honest. He does what he does and hopefully he still does it well but beyond that we don't care. The name was given to us and the logo we use is the one Abaddon designed originally with the addition of Inc. We don't do as he does and spend time in interviews and onstage to audiences, disrespecting anyone...it's just not who we are..

A little about yourself Tony.... what musicians inspired you to play as a young fellow?
I was raised on Rock N Roll, then lived during the Glam period in the UK as we as hearing the likes of Kiss and Aerosmith etc...when we moved to Canada in the mid 70's but truly, I was inspired by the US punk outfit the Dickies, who pay fast and furious in 1978!! Then I heard Motorhead and it was a over...THAT bass...THAT Man...I was sold. Many bassists are influential to me but to just get up and play it was him and his band...When I formed my own Metal band I thought...what if the speed of the Dickies met the sheer volume and power of Motorhead...and years later, who would have guessed what was to happen in our musical world

How important is the spiritual aspect of music for you ???..... I believe I read somewhere that you are a satanist (don't worry I am one too.... and I won't tell anyone...) is this a sideline or a core aspect of your life and music?
CORE....how important....it IS ALL

You started playing bass in a band called Atomkraft... What was life like then and how has it progressed now (you had great hair back then by the way!!!)?
Hahaha...great not sure but hair...ahhhh yes...lol. I started as Guitar/Vocals but switched to bass/vocals when we lost our bassist before some shows...and never looked back. Life was adventurous then and full of excitement and hope...now? It is exciting and full of pleasure...I was rushing to eat up the word back then and it passed too fast...now I am taking my time to dine properly

How did you get involved in Venom in the first place?
I was waking down the street when.......lol. We had a close association since the start and when Cronos wanted to move away from the heavy dark stuff and be more like the Dave Lee Roth kind of thing...he left and there was a deal on offer...I was approached by Abaddon (who had been part managing my other band and also had just completed a tour with us as tour manager...and along with the Venom Manager...they offered me the job. They thought I was best qualified in Knowledge and style...I then helped bring Mantas back as I said there had to be 2 for it to be legitimate in my eyes...and WE were born again.,

What do you think about the black metal bands of today? Most of which are influenced by Venom... Do you feel any affinity with them?
Do I? No...are we ALL connected...hell yes...as a father teaches the  son or daughter to take what he has done and make it better and expand on it...so goes the influence...in all things extreme, they all followed the path laid by Venom and Motorhead but influenced along the way by King Diamond, Chuck Schulder, Bathory, Tom Warrior etc etc....the greatest thing...they made Black Metal, the genre, their own and a proud style of extreme music...THAT is incredible

Regarding Jeff.... Can you give us some background on what makes him tick? Fave bands? influneces etc.... he is a ground breaking gutiar player and many would like to know!
Tea.....Martial Arts.....his music...playing...he lives to pay his guitar...a prolific writer, always doodling riffs..lol. He now has his home studio and is into producing BIG time...loves it...spends days in that cave hahaha....fave bands? He Loves KISS but main, Judas Priest...influences are many favs...Gary Moore  and Zak Wild he likes a lot but direct influence? There can be only on and that is KK Downing....He never see's himself and groundbreaking but that is why he is my brother....I like humble...when so many are arrogant for no reason deserved...he is not...

I'm not sure if this question effects you or the other guys in the band but obviously venom influenced some big bands (Metallica, Slayer, Megadeth ... and not to mention my own band hahah) does it shit you up the wall to see these dudes become world wide sensations? I don't think venom ever got the recognition they deserved from either the original lineup or the lineup that you were in? What's  your thoughts on this?
Well, I think for them more than me that does smart a little but it was just situations and decisions that were to blame...as friends and peers...I think there is always the greatest respect....and NOW anyway....We will be joining them again....albeit a tad later than expected but...we always prefer to make and entrance!! lol We are the guys who don't care whose party it is...we'll come take everything anyway....

In regards to M:PIRE of EVIL (the guys last band before rebranding to "Venom Inc...") how would you say the sound and playing has progressed?:
We we still have that album almost competed so we' get to that too..we are not that band re-branded as this band...that band is different, we do what we want...in every way...unrestricted...and that may seem odd as if VENOM INC is restricted but what I mean is...there is no particular theme with the one and a definite theme with the other...Musically....we have liberties we may expand on with M:PIRE we will not with VENOM..

Your predecessor (Chronos) was an intimidating and larger than life front man... I would love to hear how you stepped to the plate and faced the music as the new front man of venom... it must have been scary!
Scary???Ahahaha...erm no...I/m not trying to be disrespectful at all but I wasn't on the same side of the fence as you...so for me...intimidating? No...larger than life? Yes...Funny, nuts...always jumping around...all of that has gone now of course...and it's a shame but...who cares...life moves on...I never gave him a thought once...I don't FOLLOW people....I am just ME...that's what you get....I was me when I came in...because I was me before...I left as me and I am here as me..like it...good..thanx , cool, don't ok...no worries...see ya..., we all have things we like and dislike..that's the beauty of life..always full of choice.,...I joined as me and wrote my songs and attacked the old songs with the passion I felt for them....just like I do now...I play from the heart and with honesty and the songs need to be slammed into you not done as a cabaret medley, this was never the Rolling Stones...hahaha

Your recently announced Sign up with Nuclear Blast could really put your guys back on the map and show a lot of young players (and even a former member) how its really done... Is there anything you have in mind that will stamp the boot of trad metal down on their faces? Whats the plan? I hope Nuclear Blast gives you guys the respect you deserve!
NB are the best...we ALL know that and I have wanted them for over 8 years for us and 15yrs before....loyalty is all and we will deliver the best we can possibly give...This band is REAL...this band MEANS it and this band will show why Metal was and is and will be so important to generation after generation of young people who need to feel less alone and that when you need to scream....you can....louder than anything and heavier than you thought possible.....all anyone has to do is join us....and feel it burst right into your soul....ALL HAIL
Posted by Gorenography at 02:40